You’ve gotten your campaign off to a great start! It’s exciting when you first launch your campaign and see a lot of donations, fundraiser signups, and activity. It feels like all your hard work is finally paying off.

But, after that first initial spike in donations in the days following your campaign launch, donations and fundraiser activity can die down.

All of a sudden it’s more difficult to keep driving donations and it feels like you’ve hit a wall.

What you’re experiencing is called the mid-campaign lull, and it’s totally normal.

For successful short term fundraising campaigns, the typical rate of donations chart looks like this: 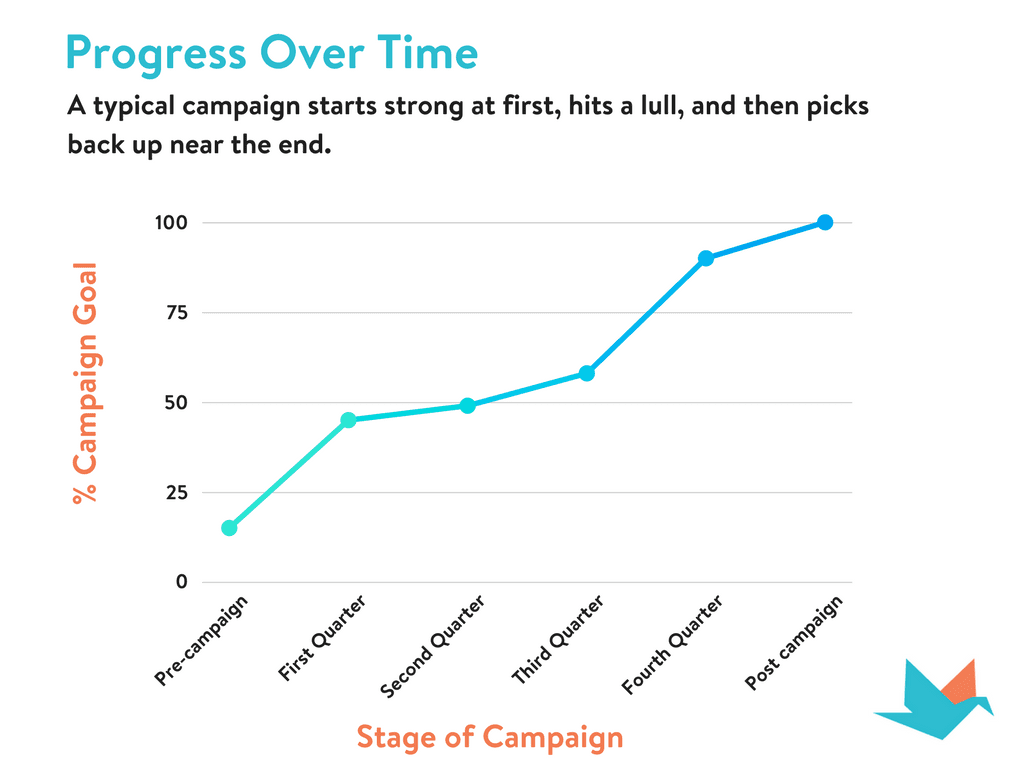 For most campaigns, there’s a higher rate of donations in the beginning and end, with a slight leveling out in the middle. In other words, most short-term campaigns slow down in the middle of the campaign, and this is typical across many nonprofits.

Reaching this part of your campaign can be scary because donation rate decreases from the rate of donations experienced during your campaign launch, and you may feel like your audience is no longer interested. For the first-timers, you might think your campaign is failing.

Many times, the lull is caused by fundraisers and donors saving their efforts for the end of the campaign, when there is more urgency to get donations before the end date.

During this lull, there’s things you can do to boost donations and activity on your campaign. Here’s a look at our top 6 recommended strategies to help you boost donations:

While there’s several things you can do to boost donations mid campaign, sometimes the easiest solution can be overlooked.

Sometimes your campaign slowing down is just a symptom of a drop off in campaign promotion!

Take a look back at your emails you’ve sent- did you send more around the beginning of your campaign? Have they become less frequent as of late?

Unfortunately, while your audience may have read a past email or engaged with your campaign on social media, your campaign is likely not at the top of their minds.

Schedule a few more emails and social media posts promoting your campaign. Your audience can always use an update on campaign progress and they certainly won’t grow tired of hearing more about the great work you’re doing and hope to do.

But what content can you be promoting to best energize your audience?

There’s a few types of content you can create that help drive your audience to your campaign and help keep your campaign on the minds of your supporters.

Each of these stories should be communicated across multiple distribution channels to have the biggest impact such as:

Here’s an example of a plot driven story by World Bicycle Relief, distributed to their audience on Facebook:

In each of these posts and distribution channels, you should include a call to action that prompts your audience to make the next step to get involved. It’s typically a verb-oriented and outcome-oriented. Your three typical calls to action for a crowdfunding campaign are:

For more detailed tips on crafting calls to action, check out our popular call to action guide.

Introducing these new stories can remind fundraisers why they signed up to fundraise for you in the first place and encourage them to keep going, while these stories also work to connect with your broader audience and have proven to boost donations.

If you’re seeing that your donations have slowed, one of the best ways to suddenly boost donations is by introducing a match in the middle of your campaign.

A matching gift from a donor or corporation that matches all funds donated within a certain time frame works to engage your audience in a short period of high donation rates.

Matching gifts immediately elicits the interest of your audience and even increase your donation amounts, so introducing a matching gift in the middle of your campaign when things are slowest is a surefire way to boost your campaign and keep up momentum through the end of the campaign.

Here’s a look at how Schoolyard Farms promoted their matching gift to help drive a spike in donations mid-campaign:

Schoolyard Farms emphasized the fact that donations made during this time have twice the impact and pointed out that meeting this match will push them over halfway to their campaign goal-marking a major milestone in their campaign. 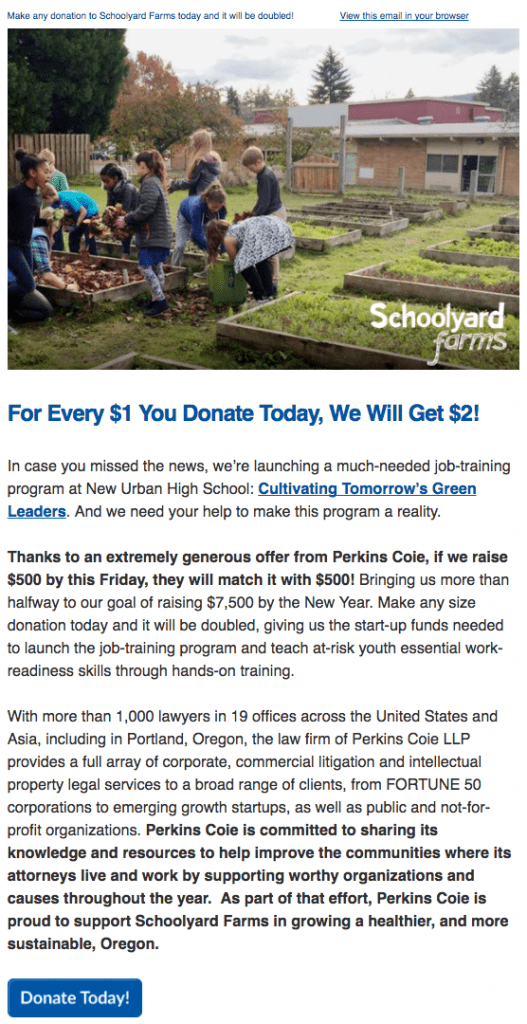 When you have a matching gift of any size ready, you’ll want to go full force on promotion with emails, social media posts, blog posts, and customized images to communicate the match. This way, donations are encouraged within a short period of time (whether that be a day or a week), and it’ll give you to push you need to get things moving!

Once a campaign reaches it’s halfway mark the excitement of your supporters can die down a little, but that doesn’t mean they’re any less interested in supporting you and helping in any way they can.

One of the best ways to ignite the excitement around your campaign is to introduce a competition. A competition works to gamify the fundraising experience and plays on people’s competitive nature to increase fundraiser and donor activity.

These competitions should be created in such a way that it’s shareable on social media to increase exposure and engage fundraiser and donor networks. Here’s a few kinds of competitions I recommend:

Here’s an example from Charity:Water of how a personal challenge not only engages fundraisers, but truly inspires donors to join in their personal journey:

Getting your fundraisers to act on your behalf, whether that be taking a photo or walking across the country, shows their networks that they care enough to do something, which inspires their audiences to get involved too.

We recommend using your campaign’s hashtag to track posts , so if you don’t already have one, it’s time to create one!

For some of these, the content generated by fundraisers and donors also doubles as content you can share to promote your campaign as well- distributing the weight of creating promotional content to your audience and taking some content creation off your plate!

A flash fundraiser is typically a 24 hour period with a fundraising goal that will help you get to a milestone. Think of this as a mini-campaign inside your campaign.

It doesn’t seem like just saying you’d like to raise X amount in 24 hours would work, but flash fundraisers have proven to be wildly effective because it presents your audience with a challenge and time constraint, which incredibly heightens the sense of urgency.

Choose one day: a day that possibly has some symbol or importance to your organization (ex. Valentine’s Day for victims of domestic abuse). The day of the blitz, send out a series of emails requesting donations. The emails should include an emotional story, appropriate imagery, and a call to action that expresses urgency.

With set of emails going out the morning of their fundraiser, Grey2k USA was able to raise over $14,000 in just 16 hours in their first flash fundraising campaign on CauseVox on #GivingTuesday.

If your campaign happens to fall near #GivingTuesday, we highly recommend incorporating it into your campaign. But flash fundraisers can be done on any day you see fit- and bonus points if you can tie the day in with your mission!

Imagine you’re a fundraiser that has just raised $500 from friends and family for this cause you care so much about. But things have slowed down, and you feel a little tapped out. Not only that, but you haven’t heard from the organization at all except for more promotional emails. You may question if the organization even cares about all the effort you’ve put in so far.

Your fundraisers and donors are the heart and soul driving your campaign forward. They are your champions, helping spread the word about your organization and helping provide the funds that help you accomplish your goals.

Reach out to your donors and fundraisers and thank them for their efforts so far! To know that you care that they care will go a long way to encourage them as they support you and move forward.

Keep in mind, about 80% of your funds raised through personal fundraising pages tend to come through 20% of your fundraisers. Make sure you especially reach out to high performers and recognize them accordingly. Consider highlighting them in a blog or social media post, helping them feel extra special and giving them the opportunity to share their story!

The best way to maintain the new donors that they bring in is to turn your fundraiser into an ambassador for your cause.

Want to take an extra step in giving your fundraisers and donors a little extra push? Consider introducing these types of rewards:

Keeping the energy high with your campaign also looks like preventing burnout and encouraging those who have already supported you to keep going!

If you didn’t see a high rate of donations in the beginning, then that may be an indication of a mis-launched campaign. You need to do some investigation at this point. Look at your open and click through rates of your email newsletter campaigns.

Perhaps you need to change your messaging or target your support base in a way that resonates with them better.

There is also a general rule for fundraiser attrition. 30% to 40% of your advocates will not raise any funds. Sometimes it may be more or less, depending on how vibrant your support base is.

So even during mid-campaign, you should still be reaching out to your audience to get more fundraisers to sign up. One of the best groups to target is the previous donors on this campaign- they’re already familiar with your campaign and they’ve already shown their support, so asking them to be a fundraiser is a great next step!

The mid campaign lull isn’t something to dread- it’s an opportunity to re-engage your audience in your campaign and mix things up to boost donations.

By using any of these methods, you’re able to keep spirits high and keep up the momentum of your campaign to reach or exceed your fundraising goals!

Share via: Considering a capital campaign? Where do you start? Start by asking and answering six vital questions designed to prepare your nonprofit to enter the process.  Exploring these questions […]